How banks can overcome the paradox of an Open Banking platform

The arrival of PSD2 in the EU means banks need Open Banking Platforms to compete. Some banks chose to develop their own software in house, while others took the faster and easier route of using off the shelf platforms created by innovative FinTech firms.

When the European Union (EU) recently updated its 2007 Payment Services Directive (PSD) regulations by issuing the Revised Payment Services Directive (PSD2), which is sometimes called Open Banking/PSD2 in the UK, many in the banking and FinTech industries saw this change rather paradoxically as both a blessing and a curse for the big high street banks.

As banking regulations change, banks typically look for fast and flexible ways to switch their software to adjust to the new legal ramifications and requirements, while at the same time remaining able to continue to utilise their core internal systems, if possible. In many cases, both banks and third party payment providers (TPPs) turned to Open Banking Platforms created by technological innovators for a turnkey solution.

Get your whitepaper
"Competing in today's platform economy"

Although externally-developed software frequently presents a faster solution, bank management can also meet with internal resistance from their IT departments who fear losing control of the development process and budget. Bank management may also have concerns about risking the bank’s reputation when bringing a new external banking technology on line so rapidly.

What does Open Banking Mean?

The shift to Open Banking requires banks to release their banking customer data in a secure and standardised form so that customer-authorised firms, including other banks and non-bank TPPs, can access it online - if their customers request them to do so.

In the UK, the Open Banking system is being created by a new non-profit organisation called Open Banking Limited formed specifically for that task, while enforcement of regulations is the responsibility of the Competition and Markets Authority. Consumer protection is handled for payments by the banks and by the Information Commissioner’s Office for consumer data.

As a result of Open Banking, consumers should have an easier time viewing their financial information, taking out loans, obtaining financial products and making online payments.

Consumers will also be able to view accounts held at different banks at the same time, which should simplify their money management. Also, Open Banking will let them make payments directly from a bank account instead of having to use credit cards, which should reduce costs.

The newly revised regulation was also intended to boost financial sector innovation and increase competition for payment-related business, and it places a limit on overdraft charges that had become quite hefty in many cases.

The Pros and Cons of Open Banking for Banks

Open Banking means banks will now have to compete with TPPs for the rather lucrative business of handling consumer payments — often for their own existing banking customers.

With this fresh competition factor added to PSD2’s new limit on overdraft charges, the possible disruption to pre-tax banking profits from PSD2 has been estimated to run in the billions of pounds over a five year period.

On the other hand, large banks that operate ahead of the curve could move quickly to develop more sophisticated open APIs that exceed PSD2 requirements and perhaps even charge a fee to each open banking provider for using that enhanced service.

Some innovative banks are also developing software for financial institutions and TPPs to license and use, such as BBVA for example, which will provide them with an additional revenue source. Furthermore, Open Banking will give financial institutions new ways of engaging with and serving their clients that can widen windows of opportunity.

Open Banking Platforms and What They Do

Banks and TPPs can also use these platforms to integrate payment functions like:

Other banks and TPPs looking to move quickly to implement an Open Banking Platform to comply with PSD2, without the significant hassle and cost of developing and maintaining such a platform in house, can simply choose the best solution on the market to fit their needs.  FinTech firms and technological innovators like Avaloq also already have Open Banking Platforms they offer to financial institutions and TPPs.

Depending on the available internal IT skill-set, specific needs and costs involved, either Open Banking Platform option could make sense for a bank, although buying or licensing a suitable existing off-the-shelf software suite will typically be considerably easier and faster. 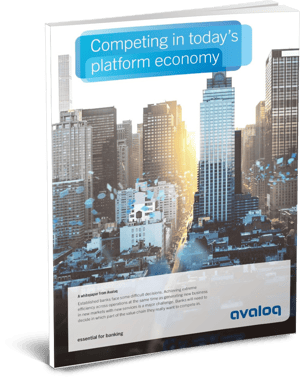