Forget the world — robots are more interested in taking over our wallets. This year, the amount of assets under management by robo-advisors is projected to reach $1.4 trillion USD [1]. By 2025, that figure is expected to double. As the industry evolves and the amount of money pouring towards robo-advisory grows, so should our understanding of three key questions: Who uses robo-advisory? What factors influence its adoption? And might it share more with human advisory than we expect?

If asked to pick an age group that’s most open to using robo-advisory, your answer would probably skew younger — and, according to a 2020 Vanguard study in the US, you’d be right. It showed that Gen Z and Millenials would consider using robo-advisors more often than older generations, with a greater percentage deeming them as ‘convenient’ [2]. Indeed, in Avaloq’s own Front-to-Back Office Report, we found that 41% of Gen Z and Millennials would be willing to receive fully-computer-generated advice [3].

However, don’t be so quick to overlook the older generations, even if they present a muddier case. Although they are less likely to consider using robo-advisors, this barrier to adoption does not appear to stem from a lack of esteem for them. In fact, around half the sample in the Vanguard study found a robo-advisor's ability to suggest money allocation or offer support in planning for goals useful.

So, what stops them from turning appreciation into action? That’s exactly what organizations looking to attract more clients to their robo-advisory offering may want to explore. Are older generations looking for a more human touch throughout their robo-advisory journey? Is the current solution not as simple as a less-than-digitally-savvy customer was led to believe? Or is it just that the look-and-feel of the offering, designed to appeal to younger customers, fails to welcome an older clientele? With some evidence of untapped potential in older generations, firms may want to ensure that they’re not inadvertently counting these clients out when designing their robo-advisory offerings and communications.

Moving on from age, another assumption around robo-advisory has to do with investor maturity, with robos often regarded as starter solutions for first-time investors with little experience and minimal assets. A study in the US begs to differ. The survey of over 5,000 households revealed that, of those who use robo-advisory most, half of them have $500,000 USD or more in assets [5]. What’s more, 45% of consumers who invest via robo-advisory would classify themselves as ‘experienced’ or ‘very experienced’ investors, with over half of experienced investors also using a financial advisor. These points serve to position robo-advisory as just another approach to investing and suggest that, while new, small-sum investors might certainly leverage such solutions, they shouldn’t be viewed as the defining audience for robo-advisory.

When it comes to segmenting the audience for robo-advisory, instead of creating a dichotomy based on wealth or familiarity with investing, the industry should begin to recognize and integrate other, more attitudinal measures into their thinking. For example, a client’s general affinity for trying new technologies, attitude towards digitalization, or level of comfort with complexity (in this case, of adding another investment approach to their finances) might all shape whether they adopt robo-advisory or not. Best of all, when organizations take these sorts of attitudinal measures into account, they won’t just learn more about client views on robo-advisory alone; they’ll gain a holistic, nuanced understanding of their clients — an understanding that can help shape more customer-centric products and communications that truly resonate.

Conventionally, human advisory and robo-advisory have been pitted against each other. The former is seen as more personable, with a customized approach, but potentially clouded by emotions; the latter is positioned as more efficient and less biased, but lacking a human touch, with some wary of trusting AI with their finances. However, some recent studies are calling elements of this narrative into question.

To begin, the suggestion that people trust AI less than human advisory is not a universal truth. A 2021 study of 11,000 respondents in 11 countries found that cultural attitudes and social factors play a role in whether consumers are likely to adopt AI-advisory solutions [6]. Where there is a lack of trust or a greater sense of fear of being cheated by human advisors, consumers have a stronger preference for using AI-solutions. In other places, where a culture considers social interaction to be important, AI is not as sought after. In both cases, AI-adoption does not seem to be influenced as much by the relationship one has with technology, but rather by the relationship one has with other humans around them, with AI, at times, celebrated as more trustworthy.

However, there is a trade-off to equipping robo-advisors with conversational tools: the assumption that the involvement of AI leads to more rational decision-making starts to weaken. In the same study, investors were more likely to increase asset allocation and accept recommended proposals from conversational robo-advisors, even when the proposal was objectively incorrect for their profile. It appears that, when elements of a human-to-human interaction are introduced, so are traces of the very issues that some investors may have turned to robo-advisory to avoid in the first place.

Studies like these encourage us to evolve past the picture of a young, first-time investor, allocating small sums to an impersonal, logical robo-advisor. In reality, the older generation find certain elements of robo-advisory useful in the same way their younger counterparts do. Experienced, affluent investors leverage such solutions alongside their more inexperienced peers. And AI-solutions can elicit trust, generate feelings of engagement and enjoyment, and even guide investors to take irrational financial decisions — just like a human advisor can.

Together, these findings serve as a clear nudge to the industry to leave behind certain dichotomies and form a more nuanced picture of robo-advisory and its users. What with the level of growth still predicted to come in this space, those organizations who do might find themselves at an advantage in the ongoing robo-advisory race. 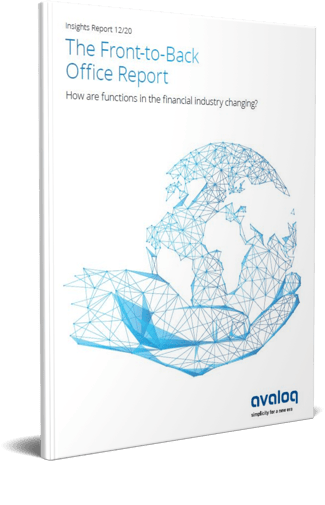 How should financial institutions react to changing client needs? How will digital transformation change the functions of the Front, Middle, and Back Office? What skills does a team in these areas need for the industry of tomorrow? Read what leading executives in the financial industry have to say on these topics, in our newest edition of Avaloq's Front-to-Back Office Report.